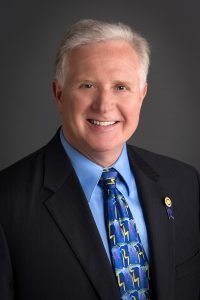 I felt a certain duty and obligation knowing that I would be at the helm during RCL’s Centennial Year. I hope that the members feel that I honored my responsibilities. Let’s take a look at the journey! Many apologies for the length of this “synopsis”. To be honest, I don’t think it is inappropriate for my notes to be more voluminous than other presidential summaries, as my notes might help a future president celebrate the 125th or 150th or 200th celebration!

My very first meeting had no speaker. It was just a casual social event, our Centennial birthday party! A cake, some punch, hors d’ouevres, and such, put together by our friendly caterer, Hess’s’ Barbecue Catering.

Shortly after that relaxed opening meeting, I was able to twist the arm of an old family friend, Dr. John Sever, to speak on Rotary’s Global Polio Eradication Effort. Dr. Sever is the voice that brought the polio eradication effort into the Rotary world. Whether our membership recognizes this, or not, we were privileged to have been addressed by this gentleman who has been so instrumental in what will ultimately be Rotary’s greatest gift to mankind. Our membership also needs to be reminded, and I will do so now, that OUR club was selected as a model club for what became the PolioPlus Campaign. We successfully helped launch this most astonishing act of altruistic humanitarianism.

No organization that reaches a milestone anniversary, like our 100th year, should ignore the joy and excitement that accompanies your arrival at that point. We did not ignore it! The RCL Centennial Gala was a very special evening for those who attended. Great entertainment, dancing, excellent food and drink, and the comradery of fellow Rotarians made this evening memorable.

When I learned that I would be guiding our organization during our centennial year, I approached a gentleman whom I greatly respected, Rotarian and Past Club President Bob Montgomery, now deceased, and asked him what one thing I had to achieve that year. His prompt and emphatic reply was that the RI President should be invited to visit us and speak with us to honor our longstanding commitment to Rotary and to our community. It is no small task to recruit a sitting RI President for such a visit. I know that our club was the first to make contact and begin that negotiation because I initiated contact with his home club in Sri Lanka within days of his selection as RI President Elect Nominee, a full two years prior to his ascension to the Presidency. RI President Ravindran, and his wife Vanathy, were gracious guests focused on helping our club highlight some of our most significant contributions to our community. Of course, he was the speaker at our luncheon meeting, but let me share a few of the other activities in which he participated during his visit.

The Rotary Club of Lancaster sponsors a Mentoring Program at J. P. McCaskey High School. This program was initiated by Rotarian Rich Wolman who co-chaired the committee with Rotarian Alicia Moranz during my year. There are many Rotarians from our club who mentor youth through this program. President Ravindran participated in a hands on visit to a Mentoring Session at McCaskey and shared his thoughts on leadership, on achieving success, and on overcoming obstacles in life.

I should also mention RI President Ravindran’s brief visit to Rotary Park, which was our club’s project to celebrate the centennial of Rotary International. There, under the guidance of PP Nick Downey (and who else?), our club placed a bronze statue celebrating the importance of play for children.

The Rotary Club of Lancaster should take great pride in our Centennial Project, an initiative to help create “The Refugee Center and Community School at Reynolds Middle School: a Project of the Rotary Club of Lancaster”, which RI President Ravindran visited. In fact, he cut the ribbon to officially open the facility. His presence gave a global recognition, and endorsement, to the welcoming nature of our Lancaster community. I am proud of this project which recognizes our commitment to mankind, the builds itself from compassionate heart of Rotarians, and honors our historical policy of initiating groundbreaking and sustainable projects that have tremendous positive impact and lasting influence on our community. And the timing of this project was especially fortuitous as international refugee numbers have been steadily climbing. Our project can be a model for other organizations to mimic. Even as I write this, Rotary International is discussing with us the possibility of producing a video describing the project in an effort to promote similar projects around the world.

President Ravindran concluded his visit to the Rotary Club of Lancaster by attending, and speaking at, an evening dinner meeting. It was another great gathering of Rotarians including some from other clubs in the district and a chance for us to hear more about the vision our international leadership has for our organization.

I was fortunate, this year, to have had the chance to represent our club on three international medical humanitarian trips. Mission trips to Ethiopia, Jamaica and Tanzania were completed, serving hundreds of individuals in need of vision or dental care.

Trivia questions…especially those about our club and Rotary

Fellowship events (wine dinner? Is this going to happen?)

RI video about the refugee center

My videos? And the elevator speeches.