Effective March 13, 2020: Given guidance from World Health Organization, The Centers for Disease Control and Prevention and other agencies, we will be suspending all Rotary meetings until further notice.

A 2009 graduate of Franklin & Marshall College, where I was a geoscience major and captain of the wrestling team. Received my PhD from the University of Massachusetts Amherst in Geology in 2014. Worked for two years in Houston for Chevron as a Research Geologist. I have worked at F&M since 2017 in College Advancement – spending time as both an adjunct professor of Geoscience and 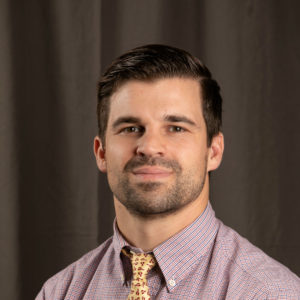 assistant wrestling coach during that time. Personal interest in the history of the College during WWII has led to the development of this work.

Since 1787, Franklin & Marshall College students and alumni have been called to fight in several wars, including but not limited to the War of 1812, Civil War, and World War II. Over 2,500 F&M men would answer the call of their country during WWII – 100 of them never making the trip back to campus.

Being an all-male College, F&M enrollment suffered greatly from the Selective Service Act during WWII, especially when the draft age was lowered to 18 years old in 1942. Guided by the unwavering leadership of President Theodore Distler, Franklin & Marshall College adapted and innovated itself to remain open during the war. The College hosted several Naval officer training programs, developed a military curriculum, integrated summer sessions, and offered night courses for civilians. Overnight the college turned into a fully functioning military training station. When the war ended, F&M had helped train over 2,900 navy and marine cadets to fight.

The Franklin & Marshall College archives contains thousands of personal letters from F&M’s students turned soldiers. Many of these first-person accounts show what life was like for F&M men who put their education on hold and toed the front lines against the evil powers of the world. Their letters to the College, often sent in response to summaries of campus activities and alumni/student wartime efforts written by College President Distler, almost always contain a common theme of longing to visit the grounds of their beloved campus again. When the war was over, President Distler and the College opened their arms and saluted those who had fought so selflessly for our country. The world, and F&M, would never be the same.*Picture accessed October 22, 2019 ‘Franklin & Marshall College https://www.fandm.edu/justin-herbert”