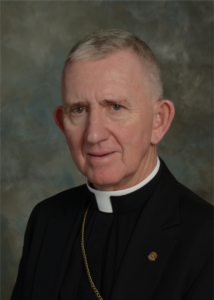 The Reverend Patrick J. Rooney STS retired in February of 2012 having served as the Senior Pastor of historic Christ Lutheran Church (1733) in York, PA. Prior to going to York he had served in Dillsburg and before becoming a Lutheran he was a member of a Roman Catholic religious order for 10 years. He has worked extensively in the human services field including serving as Special Assistant in the Department of Welfare and as President and CEO of a large non-profit entity serving the mentally ill and the developmentally disabled. For almost five years, he also served as the interim Executive Director for two local ecumenical agencies.
In his retirement, Pastor Rooney is an active member of the Rotary Club of York – the 25th largest club in the world. He served as President in 2016-17, has achieved perfect attendance every year and has served on more than 20 club committees. In 2013, he served as Team Leader for the GVSE team to Argentina. He served on the District Conference committee in 2015-16 and was the conference committee chair for 2016-17. He also serves on a number of other District committees. He completed all three levels of RLI and now serves as RLI faculty and as faculty at MA PETS. Paddy is a Major Donor to the Rotary Foundation and a member of the Paul Harris Society. He has received the York Club’s President’s Certificate of Appreciation for Service Above Self and the Avenues of Service Citation. He will serve as District Governor for District 7390 in 2019-20.
He has served as a member and chair of the City of York General Authority. He is Chair of the York County History Center and on the Boards of two other non-profit agencies and has previously served on the board of the York County Literacy Council and as President of the York County Council of Churches. He has also served on the Candidacy Committee for the Lower Susquehanna Synod as well as the Ecumenical Affairs committee and the Worship Committee. He is the author of a number of published sermons for three different groups including 10 published by CSS under the title “The Perfect Sacrifice.”
Pastor Rooney is a founding member of the Society of the Holy Trinity, a Lutheran Order and Ministerium, which now numbers almost 300 pastors in the United States and Canada. He served as Dean of the local chapter for 12 years, as Secretary for 3 and in September of 2015 was elected Senior (General Superior) of the Society. He has taught widely across the US and Canada at all 23 of the Society chapters. Pastor Rooney has also taught in the OLLI program at Penn State York and at a number of retreats throughout the United States and Canada.
Pastor Rooney is a native of England and completed his undergraduate studies at St. Mary’s College, London; studied philosophy at Catholic University of America; has a Master’s degree in Counseling from Shippensburg University and completed his Lutheran studies at Gettysburg Seminary. He has been married to Sally for almost 40 years and they have two grown children and one grandchild.
+ Google Calendar+ iCal Export